We believe that no voice should be shut down. No news should go unmentioned, no matter how inconvenient it is for our own beliefs. We believe that all media should be delivering the facts of our day and never telling you how to think, unless explicitly labeled as "opinion" To keep us honest, our proprietary platform measures our own bias daily and advises us on content.

Your Vote Keeps Us Honest.

At Scriberr, we want to offer you stories from every point of view. The problem with editors is this: they are human, and with that comes bias. In order to keep our editors honest, we collect your vote on each article to tell us how biased our entire platform is, at any given moment.

What Will It Take To Get U.S. Infrastructure Right?

Photo by Brandon Mowinkel via Unsplash

Despite theoretical bipartisan support for the revitalization of U.S. infrastructure, very little has been accomplished at the federal level for years. Big infrastructure bills have failed time and time again to pass in Congress, most recently during the Trump era, due to disagreements over how much to spend and how to pay for it. Now, with a Democratic-controlled House and Senate, there’s a narrow window to pass legislation with far-reaching impacts, and supporters posit Biden’s proposal — the American Jobs Plan — could help set the stage for American progress and success in the 21st century. However, critics on both sides have their doubts.

This week, The Factual looked at 30 articles from 24 sources to examine some of the major sticking points to Biden’s proposed infrastructure package, despite general agreement in the American public and policymaking community about the need to spend on infrastructure. Chief among these are a skepticism about the broad interpretation of “infrastructure” taken by the Biden administration, worries about using a corporate tax hike to pay for it, and questions about whether the plan actually goes far enough in pursuing climate-focused spending.

Is the American Jobs Plan Really About Infrastructure?

A predominant interpretation of the proposed spending measure by Republicans is that very little of the $2.25 trillion is actually focused on infrastructure, at least in the traditional sense. The need to invest in hard infrastructure — e.g., roads, bridges, and airports — is an area of strong bipartisan agreement; the American Society of Civil Engineers estimates that some 43% of all bridges and roads in the U.S. are in “poor or mediocre” conditions. The American Jobs Plan allocates $621 billion (or about 28% of its total) to such projects. The rest covers a wide range of goals, from supporting the care economy to investing in workforce development, especially in underserved communities. These are all things that the Biden administration argues amount to societal infrastructure, albeit some more tangibly than others.

Republicans see this as a bit of a problem for two reasons. First, if the desire is to revitalize badly suffering infrastructure specifically, they argue, money should be targeted on those measures directly, not spread across such a broad mixture of hard and soft infrastructure goals. Beyond contributing in excess to the national debt and stoking fears of inflation, spending that is too broad may fail to hit the mark on the simple targets that are the plan’s theoretical priority: fixing America’s crumbling bridges and roads. Second, Republican lawmakers like Senator Mitch McConnell (R-KY) have deemed the plan a “trojan horse” filled with long-time progressive goals that are being passed off as infrastructure. Republicans would favor far less spending that concentrates on the traditional interpretations of infrastructure and eschews what they see as tangential, politically motivated spending.

By contrast, Democrats largely support the scope of the plan and buy into the numerous policy issues it tries to target. At least in part, the argument being made by the Biden administration is that our conception of “infrastructure” needs to change over time to reflect the shifting nature of the modern world. Whereas we used to need to build train tracks and dams to move resources or extract water, we need parallel investment in less tangible infrastructure, from classrooms and community college campuses, to broadband connections and zoning, that offer benefits to the modern, knowledge-based economy. So while these measures may contradict popular expectations of “infrastructure,” proponents of the plan argue that they are nonetheless important for creating American jobs, strengthening connectivity, and providing the basis for a successful, cutting-edge economy.

Another point fundamentally at issue in the infrastructure debate is what scope the government should play. Though Republicans see a clear need for some spending at the federal level, they tend to see the private sector as the optimal driver of economic progress and Biden’s plan as an inefficient and costly way of driving growth. Large government spending, like the American Jobs Plan, assumes a far larger role for the federal government, akin to the policies of FDR or Lyndon B. Johnson. The $2.25 trillion meant to be spent over 8 years would theoretically be paid back over 15 years by raising the corporate tax rate from 21% to 28% (still below the 35% seen from 1993 to 2017). For Republicans, that’s fundamentally a dealbreaker.

Republicans view the tax cuts enacted in 2017 under President Trump as a major policy victory desired strongly by their base and any rise in taxes as a threat to economic growth. Reducing the corporate tax rate specifically was meant to cut down on the movement of corporations overseas and bring the U.S. tax rate in alignment with similarly developed countries around the world. They, and many heads of major corporations, argue that lower corporate tax rates, not government spending, foster a competitive U.S. economy driven by market dynamics. Trump and others make the case that the United States’ pre-pandemic economic success was directly driven by this policy, though others note that Obama’s second-term growth rate was just below Trump’s pre-Covid growth rate, despite having a 35% corporate tax rate. Still, such worries continue, including that costs will largely be borne by workers, not the upper echelons and shareholders of corporations.

For their part, some Democrats, including key swing vote Senator Joe Manchin (D-WV), are wary of raising the corporate tax rate back to 28%, instead advocating for a smaller rise, perhaps to 25%. President Biden has indicated a willingness to negotiate on this element, but the anticipated corporate tax changes have other measures that may impact corporations and help pay for big spending. For example, other proposed measures include cracking down on tax havens, ending tax preferences for fossil fuels, and strengthening enforcement at the IRS, including through the hiring of more personnel. An increase in the corporate tax rate has even received some support from big business, including from Amazon’s Jeff Bezos, who came out in support of raising the rate to 28% but was nonspecific on other measures. Breaking with the Republican rationale, the Biden administration is betting that the United States’ many advantages, from world-class universities to superior intellectual property protection, will keep America competitive and keep big business from relocating elsewhere, even if it means less profit at the margins. As put by The Conversation, an appropriate level of taxes is the “price corporations pay for all the benefits of American taxpayers have given them.”

Despite the plan’s big price tag, there are still progressive views that see the measure as only a scratch on the surface in terms of the expansive changes needed to shift to a greener economy that creates opportunities for all Americans while contending with climate change. In reality, the American Jobs Plan has a lot of measures that can be seen as climate-forward, modern thinking for the 21st century, from $174 billion in investment in electric vehicles and charging facilities, to $100 billion for broadband internet and $213 billion for retrofitting homes, commercial buildings, and schools. Likewise, there’s considerable sums for plugging leaking unused oil wells and modernizing and greening electrical grid infrastructure. For Republicans, some of these items cross the line of bonafide infrastructure spending to politically motivated policy targets. For some progressives, these measures need to go further — a lot further.

For those most concerned with climate change, the plan is essentially a down payment — but fails to align with the roughly $1 trillion in spending estimated to be needed annually over the next 10 years to meet the goals laid out by the Paris Agreement. Progressive groups, including the Sunrise Movement and the Green New Deal Network, see such investments in existential terms. As the Sunrise Movement argues, the U.S. devoted as much as 40% of its GDP to war efforts in the latter years of World War II, and the climate crisis bears a comparable or larger threat that should warrant at least $1 trillion per year, or 3–5% of GDP. Key parts of Biden’s plan focus on equitably addressing issues, including climate, to maximize benefit for traditionally underprivileged communities, another major tenet of plans like the Green New Deal, but this spending has also been labeled as insufficient. For example, progressive Democrats urge that the $40 billion devoted to public housing is but a drop in the bucket — New York’s housing authority could use that entire sum alone in getting public housing in the city up to code. 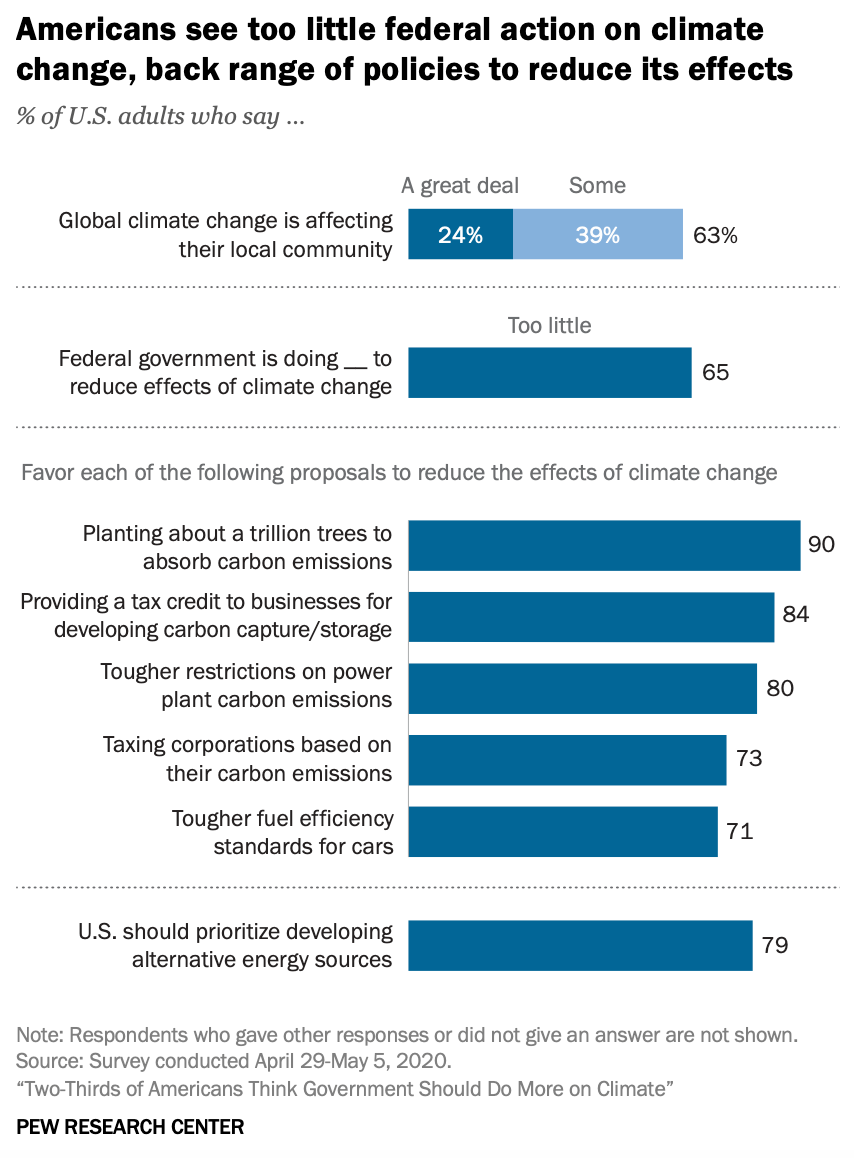 To be sure, there is widespread support for substantial action on climate, from investing in cleaner energy, to enacting harsher restrictions on emissions, to mandating higher fuel efficiency in cars. Yet whereas some Republicans like Senators Lindsay Graham (R-SC) and Mitt Romney (R-UT) have expressed openness to more conventional aspects of climate action, like carbon pricing, progressive thinking is rapidly tying climate imperatives ever more closely with social ones, seeing climate-focused spending as an essential platform for reorienting the U.S. economy in a way that levels the playing field for disadvantaged groups. Biden’s plan targets some of these areas specifically, from focusing on reconnecting communities that have previously been ignored by public infrastructure to directing $10 billion toward the Civilian Climate Corps — an initiative that seeks to employ young people in environmentally-focused jobs to restore public lands and plant trees. It is in areas like these that more conservative interpretations see a mashing up of climate-focused infrastructure projects with progressive policy goals, contributing to a key aspect of Republican opposition.

Depending on who you ask, Biden’s plan is ambitious, egregious, or even inadequate. While much of its content goes to areas where many Americans can agree investment is needed, there are hang-ups that, though they may not derail the bill, could make it a bitter pill for some to swallow. Critics might say the spending measure is destined to get forced through despite their protests, just like the $1.9 trillion American Rescue Plan; the Biden administration may believe that this is the best option for pursuing needed policy change, however imperfect the process.

Note: This Google Sheet lists articles used to inform the findings of this article and indicates how the articles scored according to The Factual’s credibility algorithm. To learn more, read our How It Works page.

Interested in hearing more from The Factual? Our daily newsletter uses the credibility algorithm to analyze 10,000+ articles every day to highlight the very best journalism on trending topics.

How Nonpartisan Was This Article?

Show us on the slider what kind of bias, if any, you thought the author had. Why are we asking?

Thank you for Voting!

Your input is helping other readers identify bias and helping them break through their ideological "bubble"!

CicLAvia Returns After More than a Year Since the Pandemic

Donate to keep Scriberr reporting on news that matters to you.